(Pulaski, PA)...On the heels of multiple exciting announcements concerning the continued expansion of RUSH throughout the off-season, the Sweeney Chevrolet Buick GMC RUSH Racing Series powered by Pace Performance is excited to launch a non-wing Sprint Car division!  The Sweeney RUSH Sprint Cars powered by Pace Performance will debut in 2018 throughout the western Pennsylvania and eastern Ohio region with the ability of its technical rules package to be adopted throughout the country.  The program will be kicked off with the Bonnell's Rod Shop Weekly Series point fund of more than $20,000 with $5,000 going to the inaugural champion!  The RUSH Sprint Cars will join the Late Models, Sportsman Modifieds, Pro Mods, and Pro Stocks on the dirt side of the RUSH Racing Series umbrella. 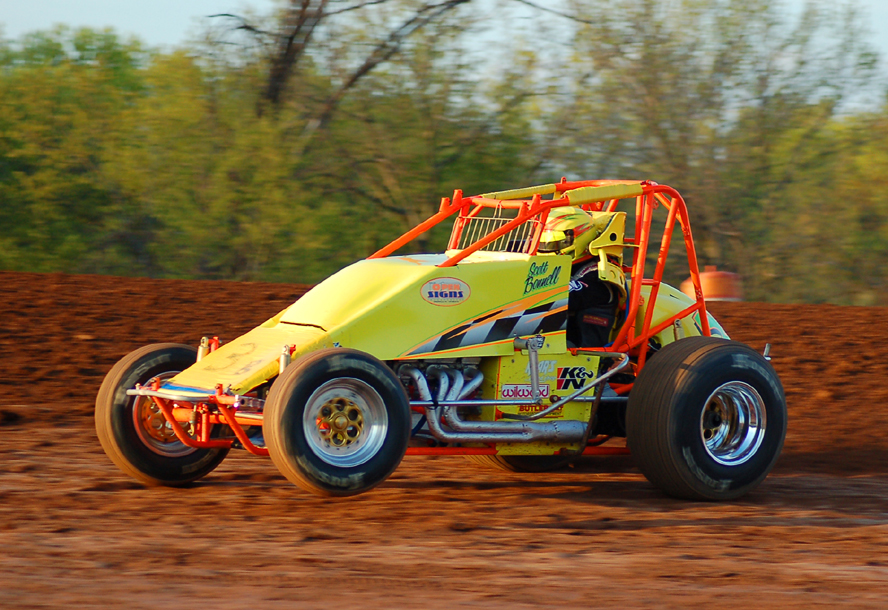 "Every year we're asked about creating a Sprint Car division under RUSH," explained Series Director Vicki Emig.  "I think the timing is perfect to introduce this division to our region, and I feel certain that the same success that we've seen over the years with our other RUSH divisions will be duplicated in the RUSH Sprint Cars.  Rather than waiting until the fall or winter, we wanted to get this announcement out now so drivers have plenty of time to prepare to participate in the spring of 2018.  We're really looking forward to bringing all of the valuable and exciting programs that have helped propel the growth and success of all of our other RUSH divisions throughout the years to our Sprint Car program and its racers."

"While the 410 Winged Sprint Car division continues to be popular, we feel there's a great need for an more affordable, cost-contained Sprint Car division in the region," continued Emig.  "After much discussion and thought, we felt the non-wing/GM 602 crate was the direction we should pursue.  The division will be modeled after our Sportsman Modified division, which has grown in leaps in bounds over the past three years.  As a non-wing division, the class will also offer a different product for the fans."

Throughout the past several weeks, several former and current stellar "410" Sprint Car drivers have been consulted to discuss their thoughts and gather their input on the Series and its place in the future of regional Sprint Car racing.  Their response, support and endorsements have been tremendous and a press release containing their remarks will be released soon by the Series.  One of those racers that immediately stepped up to not only offer his support of the concept, but to also financially enhance the program was Scott Bonnell.

"I believe creating a economical non-wing Sprint Car division to western Pa- eastern Ohio area will be beneficial to both racing fans and those wanting to get into an affordable form of open wheel Sprint Car racing," expressed Scott Bonnell.  "Vicki Emig and her team have a proven record of success, and I believe we'll see this division be no exception!  Bonnell's Rod Shop is proud to be the Weekly Series sponsor and is excited to be a part of this 'back to grassroots racing'. My grandfather, Al Bonnell, a national midget champion, would be very proud!"

A schedule of events will be developed utilizing numerous RUSH-sanctioned speedways throughout the region that will give the RUSH Sprint Car racers a full schedule of events and incentive to begin preparing for the 2018 season.  The possibility exists for a possible exhibition event(s) during the fall of this season.

"Just as we did for our other divisions, especially the Sportsman Modifieds in the inaugural season, we'll look to have several regional speedways host events to give racers a full schedule, which will allow them numerous opportunities to accumulate points towards our championship programs," added Emig.  "Our RUSH-sanctioned speedway partners have always played a very important part in our ability to introduce and grow the various RUSH divisions.  Last year, six different regional speedways hosted events for the Sportsman Mods.  That class has grown from an average of 10 cars a night at Sharon in 2014 to around 15 the second full season to over 22 a night in 2016.  Year two saw us add a Touring schedule, which has grown over the past two years.  A record 29 cars were at Lernerville at the final event, and we're anticipating even more cars in that division this season."

"It's very impressive to come out of the box with a point fund of more than $20,000," stated Emig.  "I cannot thank Scott Bonnell enough for stepping up and growing this inaugural RUSH Weekly Series point fund for the Sprint.  Since Scott quit racing, he's given back so much to racing, and we're very proud to have his and so many other Sprint Car drivers' endorsements.  With more than a year's time before the first official race, we'll continue to work hard to bring additional benefits to the Series such as contingencies and a Manufacturers Night like our other divisions."

As with other the RUSH divisions, membership is never mandatory; however, does allow racers to compete in the $20,050 Bonnell's Rod Shop Weekly Series point fund and "Futures Cup" (see breakdown below)  and grants an additional $100,000 excess participant accident insurance policy when competing at RUSH speedways.  The cost of membership is $125.

Bonnell’s Rod Shop is located at 8000A Middle Rd., Fairview, PA 16415.  Bonnell's Rod Shop specializes in classic, custom,  and  modified vehicles.  Their staff is dedicated to providing each and every customer the very best in workmanship and customer service.  With over 100 years of combined experience building quality hot rods is in their blood. Whether you need a taillight bulb replaced or you want them to create a one off show piece.

Scott Bonnell and his Auto Group that also includes Bonnell's Collision Center with locations in Erie, Pa. and Fairview, Pa. is committed to the Erie community.  Their 80 local employees volunteer their time and services in the community to make Erie stronger.  They are a proud sponsor of Auto Racers For Kids Charities, please check out their on-going community events.  For more information, check out their websites at www.bonnellsrodshop.com and www.bonnellcollision.com.  Be sure to like the Bonnell's Rod Shop Facebook page at www.facebook.com/bonnellsrodshop.